This article explains both backstory and solution for fitting an object within a Perspective camera in three.js library. In other words, how far to pull back a camera on z axis to get an object displayed as big as possible without clipping.

Initially I’ve been using viewstl to display the 3D (STL) models on this blog.

But I wasn’t happy with the auto_resize functionality. So much that I filed an issue for viewstl. But the solution offered (to use manual zoom) also doesn’t fully work for me1.

And because during my research of this problem I stumbled upon Anthony Biondo’s Simple STL Viewer post, I decided to also roll out my own – simpler – STL viewer based on his2. After all, three.js has all the components needed. So all I needed was a bit of a glue.

When further researching the “fit camera to object” problem, I found some discussion on three.js that offered some solutions. But none of the solutions I’ve found really worked well for me.

Alas, I think I have finally cracked the nut. :)

There are essentially two problems with most of the algorithms I’ve found:

Since my simplified STL viewer has a single model always centered on (0, 0, 0), I can basically take a shortcut that allows me to compute optimal fitting:

The z distance of camera is half of z-size of the bounding box, and then the bigger of:

Why does that work? Because I need to have the entire front size of the bounding box (BB) visible. So the half of z-size gets me from center to the front of the BB, and then a bit of trigonometry gets me to the correct distance given aspect ratio and size of the side.

It’s sort of hard to explain but much easier to draw: 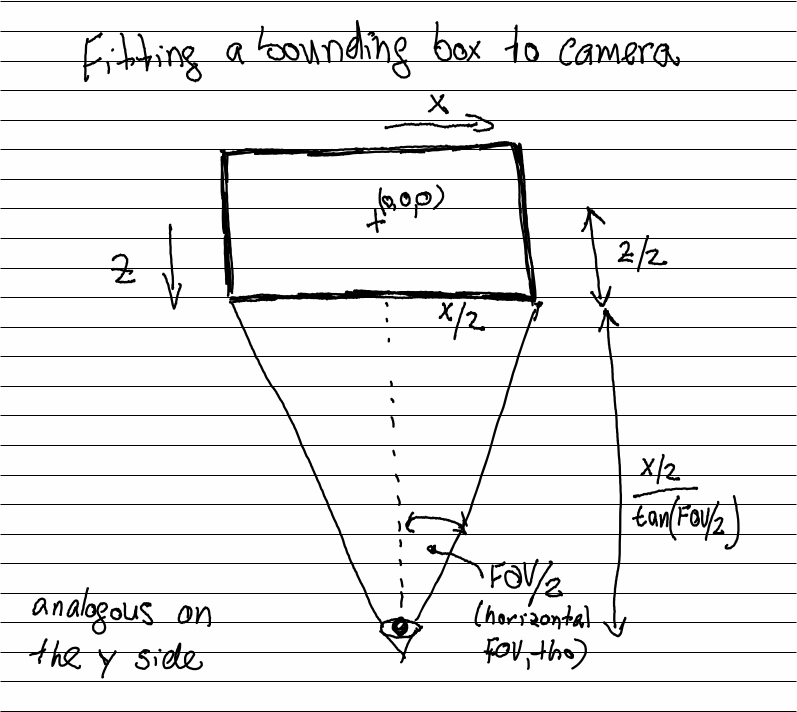 I also tried documenting it in the code:

With that, the auto-sizing works well (to my eyes anyway).

If you want to get inspired by the full stlviewer, check out the stlviewer-datatag.js.

Check out the auto-positioning of the same model in 4 different rotations (with bounding box drawn around the object)3:

[Right here should have been an interactive 3D model.]
← → ⇈