Succeeding at a network loadtest

As mentioned in the Failing at a network loadtest (for now) post, I want to test packet forwarding performance diffrence between ERLite-3, ER-4, apu2 (w/ debian), and apu2 (w/ danos).

So it seems that APU2, while otherwise a magnificent machine, is not well suited for a proper source/sink for the network test.

In the last post I mentioned that I bought an Intel NIC on Amazon(.de) Marketplace for 39€ (delivered).

Sadly, the DPD courier seems to be taking the package through another galaxy. In other words, it’s still not here (after 2+ weeks).

So being the cheap ass ^W^W frugal person I am, I bought a different card, a dual port Intel I350 NIC from Ricardo.ch1. This time for 49 CHF (with pickup in person).

And it’s a beauty. Checking DPDK doc site, this NIC is fully supported by DPDK, thus by T-Rex. Yay.

Time to check the loopback test works in the new setup.

So, again, I went through the moves:

Lo and behold, after running ./t-rex-64 -i in one terminal, ./trex-console in another, and going straight for the kill:

I’m getting a fabulous result of:

Which means that my desktop – with the dual-port I350 Intel NIC – can forward a linerate (1Gbps) of 64B packets in both directions simultaneously. And all that at ~7% CPU load (single core of my i7-4790K).

In other words, it’s not even breaking a sweat.

But as exciting as that result is, it’s of limited value if things were to go pear shaped with some of the devices I want to stress test3.

While I was waiting for the NIC to come, I briefly spoke with Pim (author of the loadtest post that got me inspired) about what I’m trying to accomplish.

Turns out, he was one step ahead of me, and already put together an automated loadtesting script that drives T-Rex and spits out json with the loadtest stats.

The idea behind the loadtest driver is as follows (I’m quoting verbatim from Pim’s trex-loadtest.py):

In order to use the loadtester, I had to configure it:

To which, you could say – what’s the use of having a bunch of stats in a json file, if I can’t make much sense of it? Yeah. Precisely.

Because Pim already ran bunch of loadtests on his gear, he supplied me with bunch of his *.json output files (and a high level description of how the loadtest should look like), and I got to work writing a visualizer script.

To cut the story short, trex-loadtest-viz is that visualizer.

Btw, at first I was using gnuplot to plot the curves, but soon it became apparent4 that not having an interactive graph would be a loss. So I switched to C3.js library5. Thus gaining interactivity, and pushing some of the computation to the client side.

The results are pretty spiffy graphs: 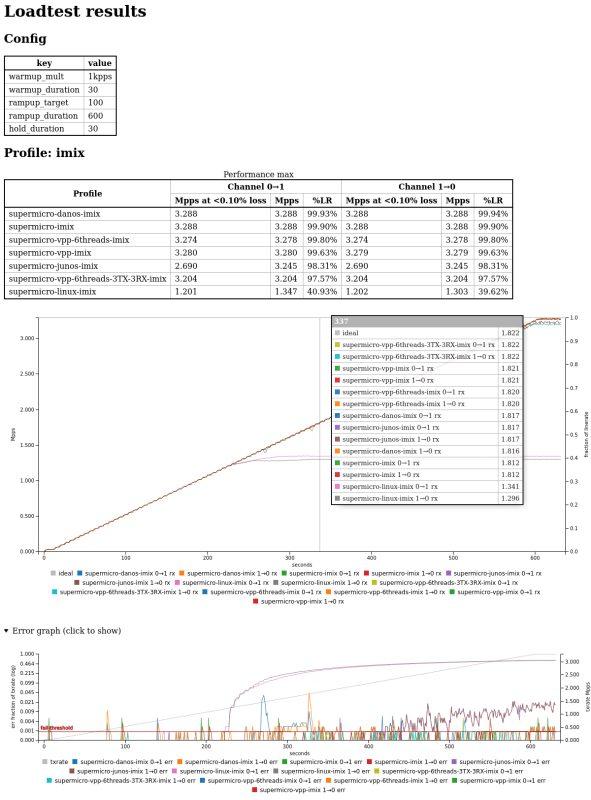 output graph screenshot (with a mouse in the middle of the first graph); click to enlarge

But to give you the first hand experience of this goodness, I ran one more test:

got the loopback-64B.json, and then graphed the result using:

See the output for yourself.

Granted, it’s not as exciting as the multiple DUTs on the screenshot above, but more exciting graph will come in the next installment. :-)

Having the setup for the loadtest ironed out, in the next installment I will take all these bad boys for a spin: 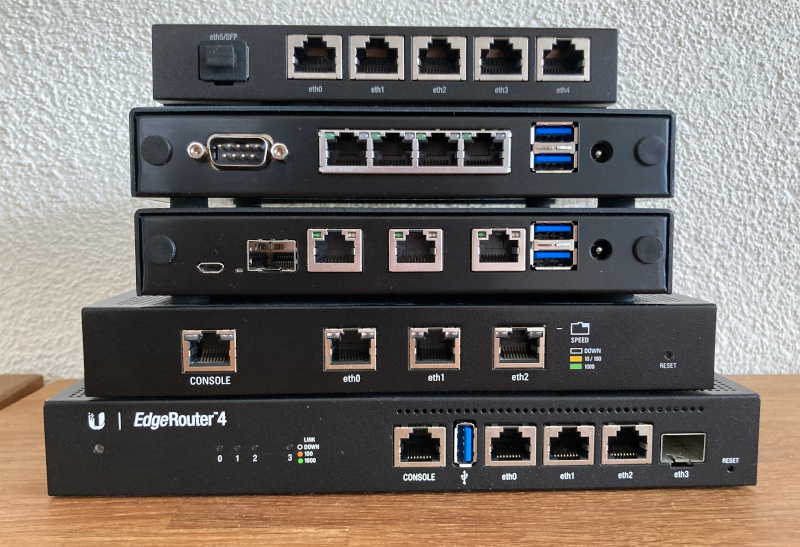 From top to bottom:

On the APUs I plan to compare vanilla linux distro and Danos. On the Ubiquiti gear, it will be tested running the stock firmware.