Traveling 20+ years back in time

It is a rare treat to be able to travel 20+ years in the past.

I was just graduating from high school, about to go to university. The Y2K craze was in full swing, ICQ was still all the rage, and the Internet was far from common.

And almost all of my personal memories from back then are now rose-colored. Yes, despite only having dial-up modems, terribly slow computers, and only GSM dumb-phones to speak of1.

And I presume I could wax lyrical about the era gone past for quite a while. But today I want to talk about one specific encounter.

About a time capsule I unearthed, in the form of my senior high graduation project: an MS-DOS program to compute parameters of toothy wheels.

Going through some old CD/DVD archives of mine, I spotted an innocent looking file: zav.arj. Turns out, even in 2022, arj is available in Debian stable.

brought back a flood of memories.

I couldn’t resist, spun up latest FreeDOS image in VirtualBox and was greeted by the terrifying beauty: 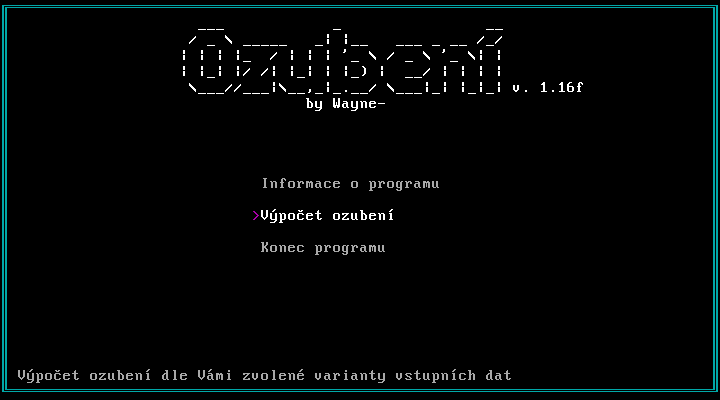 Back then it was all in Czech, for DOS, and – by today’s standards – trivial2.

But that doesn’t stop me from fondly remembering the hundreds of hours (yes, seriously) I’ve sank into something that could’ve been “phoned in” in just a few hours in the then-typical fashion:

And to be fair, that’s a perfectly valid approach that would have netted you a passing grade.

So what was so special about my little program?3

I happened to hate a few things about plain DOS:

So I went completely ballistic and wrote a TUI from scratch. Because as an auto-didact I had no idea how the proper TUI in Borland C++ 3.1 worked.

Also – infatuated by HTML – I built a “document” compiler and parser (used on the intro and help screens) that compiled a simple markup (part of help.x):

into a continuous <char><color> stream (line-adjusted) that was then arrow-scrollable on the 80x25 display area.

But what’s the lesson? Because none of this is truly remarkable. It might have a decent level of craftsmanship7. But that’s it.

I think the lesson is this:

If you bang your head against the wall long enough, decent work inevitably pops out.

It probably helped a lot that I was hopelessly in love with computers by that time. And that I didn’t own one. Because constraints tend to have a positive effect on productivity and creativity.

So maybe a second lesson is about the work of love and overcoming obstacles.

If you want to do decent work, go bang your head against a wall for a multitude of hours8. See what comes out.

And on the off chance you want to explore the original beauty, including full source9, here’s zav.arj for you10.